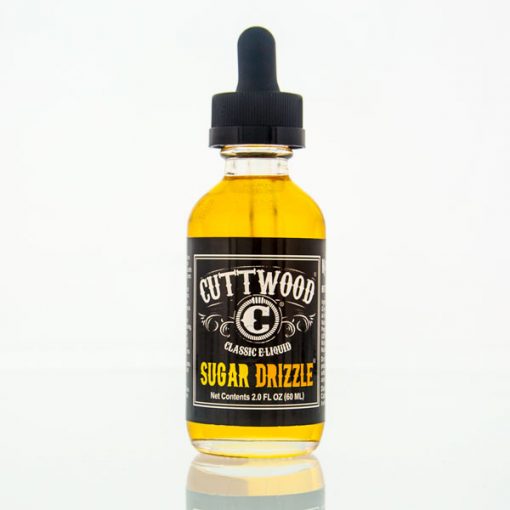 So far, I have not found an all day vape that is comparable to Sugar Drizzle by Cuttwood. This is an awesome e-juice that you won’t get tired of. It is a fairly sweet e-juice. The flavor profile is not very complex. It tastes just right. The taste of Sugar Drizzle reminds me of teddy graham snack cookies. The cinnamon flavor in this e- 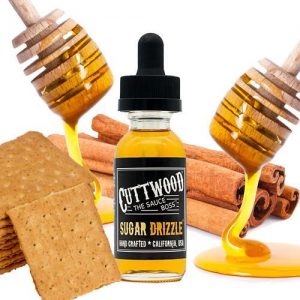 juice is more of a bakery type cinnamon like cinnamon buns than a strong spicy candy/gum cinnamon. It brings back childhood memories of eating cinnamon toast for breakfast in the morning.

The cinnamon tastes great in this e-juice. Sugar Drizzle has a very mild, natural flavor and is a great dessert vape. Sometimes, it tastes like a cinnamon Teddy Graham, a Cinnabon, or cinnamon toast crunch. It is an excellent e-juice with a touch of uniqueness.

This e-juice is recommended for anyone looking for an e-juice with Graham crackers flavor and not something fruity. It will satisfy your sweet tooth cravings. It has the sweetness of light caramelized brown sugar with milk and cream as well as a hint of burnt bitterness. The creamy, almost custardy undertone softens the bitterness.

A unique tangy citrus—possibly lemon—taste also runs throughout the vape. It is not very obvious but nice. It brightens the flavor and balances the rich creamy cinnamon e-juice. But there is something extra—a yeast flavor like freshly baked bread—in the background. A slight cooling effect gives a very nice touch to the vaping experience.

Sugar Drizzle tastes enjoying a good cinnamon toast alongside a glass of milk. It is also great if paired with a cup of coffee. It does not have strange notes or extraneous flavors. Sugar Drizzle is well-defined, very sweet, and cinnamony but it is not overwhelmingly strong. However, it gets a little too sweet when you go chain vape on it.

Sugar Drizzle by Cuttwood tastes like a lightly sweetened cinnamon pastry on the inhale. It produces a nice graham cracker and cinnamon flavor. Meanwhile, it gives you a rich cinnamon, milky sweet cream on the exhale. It gives you a very satisfying taste and a creamy mouthfeel. The right amount of cinnamon spice adds warmth to the flavor. Sugar Drizzle is very much like a cinnamon roll. A creamy cinnamon crunchy crust like a well-made Crème Brule continues through the exhale. The sweetness of this e-juice lingers on the lips.

The vegetable glycerin (VG) and propylene glycol (PG) ratio of Sugar Drizzle by Cuttwood is 70/30. This e-liquid is also known as Sugar Bear. You can choose to vape this e-liquid using a tank or a dripper. It will not stain your coils quickly although it is sweet. 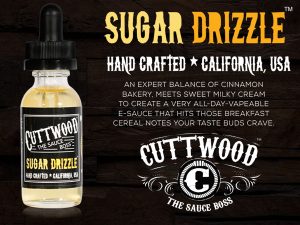 Sugar Drizzle will also give you huge clouds of vapor. It smells heavenly too.

Sugar Drizzle by Cuttwood is available with different nicotine strength levels. You can get this vape juice with either 0mg, 3mg, 6mg or 12mg of nicotine. The nicotine concentration level that you select will determine the kind of throat hit that you get. If you buy a bottle of this e-liquid and you are not satisfied with how it tastes, you can steep it for a week.

Sugar Drizzle comes in a clear glass bottle with a childproof dropper cap. There is a label on the bottle with the Cuttwood logo as well as other important information about the product like the nicotine level, VG/PG ratio and more.

Cuttwood is a well-known vape juice maker and is known for creating excellent e-juice flavors like Sugar Drizzle. Cuttwood e-liquids are made with only high-quality ingredients . You can get a 60mL bottle of Cuttwood’s Sugar Drizzle for only $24.99 at the Smoking Things online vape store. This is a good price for a premium vape juice. 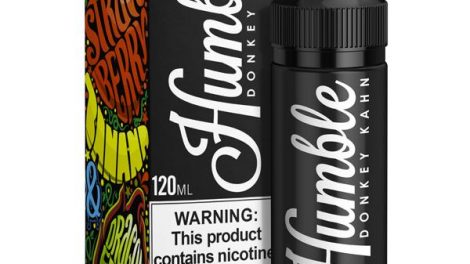 Donkey Kahn is a one-of-a-kind e-liquid by Humble Juice Co. This vape juice is produced with top-notch ingredients. Donkey Kahn contains the flavors... 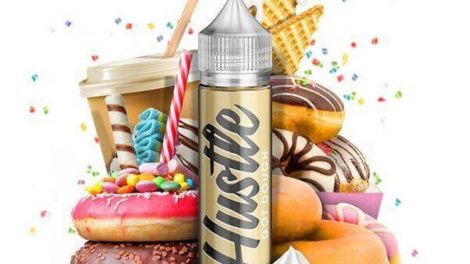 We can all agree that glazed donuts are delicious. This is one pastry that I can’t get enough of. Occasionally, I find myself relishing the taste of...